Sale on canvas prints! Use code ABCXYZ at checkout for a special discount!

Painting of the week, Magnolia Chandelier 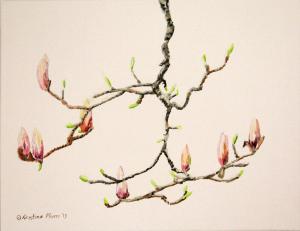 I wouldn't really call this a traditional botanic painting, because it is somewhat loose in treatment, but I liked the way it looked with the white background. I think I might paint a similar painting with a colored background to see the difference. This is a watercolor on canvas.

Painting of the week, Magnolia Shadows 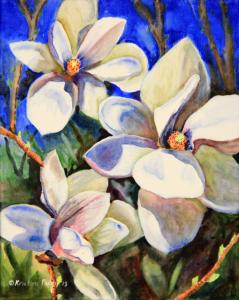 I am resuming my "Painting of the Week" blog with Magnolia Shadows. I am updating my magnolia series, starting with small paintings and working up to larger paintings. I don't have any medium to large size magnolia paintings on canvas, so I would like to bring this series up to date. Whether I keep painting on canvas or not I can't say. But at the moment they are popular and I am in an experimental stage. I am trying to make these white flowers show many colors reflected from their surroundings.

Painting of the Week, Sailing Through Life 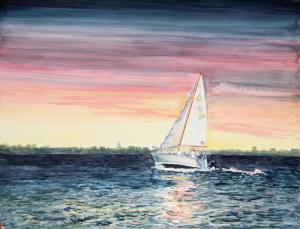 This painting is of my daughter and her husband sailing in their Oday 22 sailboat on a Lake in Madison Wisconsin. I named it Sailing Through Life. It was accually their Christmas present. It is a limited pallette watercolor on canvas board.

Painting of the week, Developing Passage 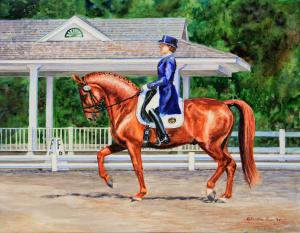 This painting is the fourth in the "At the Letter" series. In the Intermediare II dressage test there is a movement where horse and rider develope passage while traveling down the centerline towards the judges booth. This test is one level below the Grand Prix test performed in the Olympics. In the Grand Prix test the horse is expected to perform the Piaffe and Passage to perfection showing that he has completed his training. I wanted to show the horse's rider and trainer Amanda Johnson happy with her hard working mount, and pleased with this test.

Painting of the week, The Migration 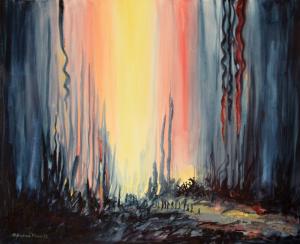 For the first week in November I have selected "The Migration". This painting inspires the imagination with the yellow glow in the background. The backlit black images could be a battle or ruins or something else intirely. Let your mind imagine what the story is behind all the people moving in the painting.

Painting of the week, Tulip Tree 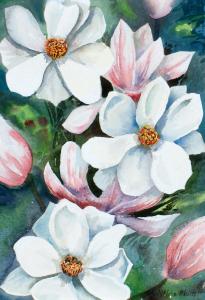 I named this painting Tulip Tree, in reference to a nickname that some southerners call, the saucer magnolia tree. Since in the southern states many people think of the Magnolia Grandeflora when they talk about the Magnolia tree and flower. Some people may not recognize this as a magnolia at all.

Painting of the week, Escape 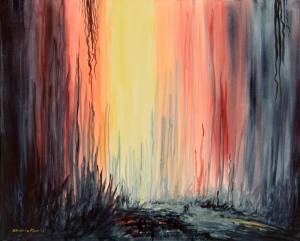 As I paint these "Violet Abstracts" I have no idea what the title will become. I do have an idea about how the painting will flow, and try to make sure it has movement. As I finish the painting, and usually the figures are close to the last thing I will add, I take whatever painting name that is popping into my head. I feel that this way, there is much more spontanuity than if I planned the name and mood of the painting first.

Painting of the week, Northern Spring 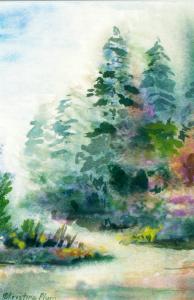 This is a memory painting of the mouth of a creek running into one of the many lakes found in the northern areas of Wisconsin. It is painted in a loose wet in wet technique on paper. In the early morning there is often a fog laying heavily on the lake, the air is still with glass like water. I can hear the loons calling now.

Painting of the week, Champagne Magnolias 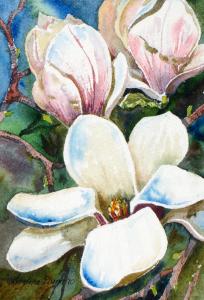 I named this painting Champagne Magnolias because some of the colors in this painting remind me of the subtle light ochre color of the sparkling wine. I also think that this flower is pretty classy in its own right.

Painting of the week, Heavily Laden 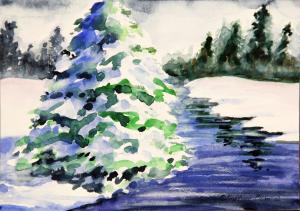 After an early season snowfall, the branches of the evergreen trees are weighed down with the new snow, slowly dropping down in the after storm quiet. I'm thinking of using this as my Holiday cards, hand embellishing them with glitter paint etc. The holidays are just around the corner...